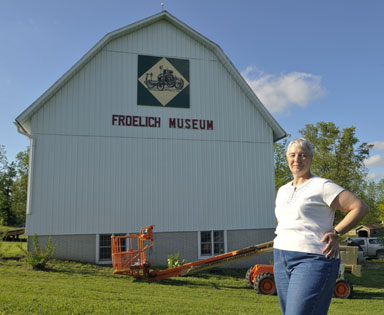 Sheryl Mielke donated the new barn quilt to the Froelich Foundation. She and her husband, Wayne, operate Mielke’s Quarry near Spook Cave. The quilt was installed on Thursday, May 28. Oden Sign Service, in Waukon, designed and painted the barn quilt.
Froelich Barn Quilt Depicts Original 1892 Tractor

While “barn quilts” have become the hottest outdoor fashion statement in Iowa, the Froelich Foundation took a big step back in time when it installed theirs last week.
Instead of the usual patchwork of brightly colored panels seen on most barn quilts, Froelich used a line-art drawing of John Froelich’s original invention – the 1892 Froelich tractor, the first farm tractor to use a gasoline engine.
The barn quilt – donated by Sheryl and Wayne Mielke, who operate Mielke’s Quarry near Spook Cave – was installed last Thursday, May 28.
“I absolutely love barn quilts,” said Sheryl Mielke, “and felt the Froelich barn really needed one. We brainstormed with the board of directors last summer and the idea of using the Froelich tractor popped up. I think it’s just perfect, especially displaying it in antique colors,” she added.
Sheryl coordinated the final design with Steve Oden of Oden’s Sign Service in Waukon, then Oden created the quilt. He painted it on two separate 4’ by 8’ metallic sign panels. The final size, 8’ by 8’, is readily seen from U.S. Highways 52 and 18.
Chad Davis, a farmer from Luana, and Russ Bries, a carpenter from Kruse & Bries Construction in Monona, teamed up to install the quilt, first fastening a wood frame to the barn, then fastening the barn quilt to the frame. Davis provided the lift.
The quilt is on the south end of the Dettmann Dairy Barn, which was moved to Froelich three years ago to add more display space for the growing exhibits at the Froelich Museum and also to serve as an events center.
The museum and its exhibits, including a general store, one-room country school, railroad depot, blacksmith shop and more are open to the public six days a week (closed on Wednesday) from 11 a.m. to 5 p.m. until Labor Day weekend.
The Froelich Foundation is a non-profit organization of more than 400 members around the country dedicated to preserving the history of the Froelich tractor. 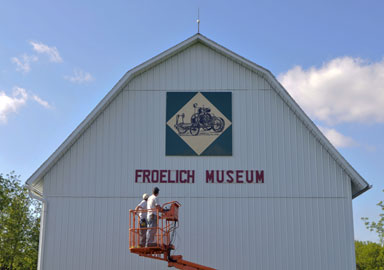 Reaching high. Chad Davis and Russ Bries use a high lift to install a barn quilt on the Froelich dairy barn at the Froelich tractor historic site. Davis, a farmer from Luana, provided the lift, and Bries, a carpenter from Kruse and Bries Construction in Monona, fastened the quilt to the barn. The quilt features a line-art drawing of the original Froelich tractor built in 1892. The Froelich tractor is the direct ancestor of today’s John Deere tractor division. 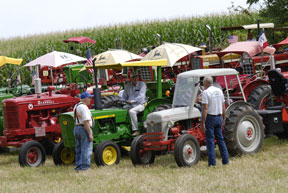 Froelich Rolls Out the Carpet For 336 Vintage Tractors
By Denny Eilers, as published in the Clayton County Register

Only one tractor was ever built in the tiny town of Froelich, Iowa. And that was by John Froelich in 1892.

But on Sunday, July 22nd, 336 vintage tractors – from John Deere to Farmall to Oliver to Massey and more – descended on Froelich to start a scenic ride through northeast Iowa.

It was a day filled with firsts.

It was the first tractor ride sponsor to use Froelich as the staging point, proving a little town can be a pretty big host to a lot of people. It was also the first tractor ride KGLO radio station in Mason City held in northeast Iowa, even though it was their 6 th annual ride.
“Our riders wanted a more scenic route this time,” said Ben Hengesteg of KGLO radio.

It was also the first major event the Froelich Foundation hosted from its recently remodeled barn. The Foundation even squeezed in a few moments to properly dedicate its new events center, honoring donors Joyce and Julius Dettmann with a plaque that will be permanently displayed in the barn.

“We’re honored to dedicate this to you,” stated Frank McMillin, president of the Froelich Foundation, “and we thank you again for your generous donation.”

The advance party from KGLO opened shop in the Froelich Depot building on Saturday afternoon to get ready for the stampede of tractors and drivers that were on the way. More than 50 arrived on Saturday afternoon, including two spiffy John Deere 4020’s.
By Sunday morning they were streaming in. Larry Cox, a Froelich Foundation member and a driver in the 3-day ride went to work parking machines tire to tire. He put more than 125 in the large lot behind Burlingame’s General Store, another 50 in the Depot area and then lines of 50 front and back leading up to the barn with room to spare.

“We may have more activity in Froelich today than in its entire history,” quipped Cox as tractors kept rolling in.

Tractor Ride Route
The ride started in Froelich on Monday morning, traveled east to Marquette, north along the Mississippi River then turned back west to end in Charles City.

KGLO farm broadcaster Mark Dorenkamp accompanied the group conducting live broadcasts along the route, including an interview with Diane Malcom, foundation director, on the history of Froelich and the role of the Froelich tractor.

“This is a great place to start an event like this,” stated Hengesteg, director of marketing for KGLO. “The Froelich people really make us feel welcome.”

Johnson’s Restaurant in Elkader catered a country-style buffet, served from the donated Dettmann Dairy Barn that was moved in 2006. Picnic tables were lined up in front and the upstairs was filled with dining tables from MFL-MarMac Schools.

McMilllin and Malcom welcomed the drivers and presented a brief history of Froelich. After the buffet dinner, KGLO held a meeting in front of the barn to brief riders on the route.

Why do folks of all ages drive farm tractors down the highway?
For some it’s meeting new people. For others it’s getting together with old friends. And, for many it’s just talking about tractors, being around them and showing off the latest restoration project.

But, for Travis Jorde, of Rochester, Minn., who drove a John Deere 1020, there was another reason.
“When it’s late in the day,” he explained, “and you’re in road gear heading down the highway, it reminds me of being back on the farm. Back then, when the sun went down and the field work was done you put it in road gear and headed for home.
“That was a great feeling."